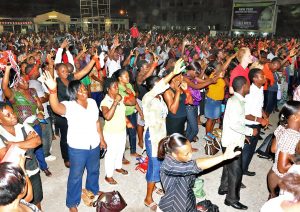 It’s here again! The only time in the life of Ghanaians where people from all walks of life take time to reflect on their successes or failures in their lives. Simply, majority of Ghanaians have put their resolutions on autopilot only on December 31, which should not be the case. It’s only on the said date that no empty seat can be located in the various chapels, cathedrals and classroom-turn-churches in the country.

Even those who have not been attending church service during the year, will make it a point to be in one of the various churches. Likewise, there comes the opportunistic charismatic pastors in the country with decorated 31st December watch-night bill boards as if they are contesting for political positions. These bill boards come with captions to attract even the atheist to the church premises for the final blessing from God in the year. Namely; “Crossover”, “Passover”, “New beginning”, “Change Over”, “The Great Move,“ and many others. However, right after the various resolutions to God on the eve of the New Year, the story is no different. Why should this be so?  With all the promises and prayers of repentance, our life as a people remains the same old story like the past years.

One of the reasons why people can’t live by their December, 31st resolution is that majority of them lack determination to execute their resolutions. Determination is not found, but it is built through a conscious effort. You can’t buy determination at the local supermarket. One has to sow the seeds of determination himself or herself in order to reap the fruit of determination.

Also, most Ghanaians are not able to live by their December, 31st resolutions because they have misplaced priorities. Have you ever started prioritizing your time, relationships, and money in the best way? Economically, people set priorities that are not within their means. Likewise, people do not set religious aims that are within the grace and faith bestowed on them.

Truly, whatever has your affection will get your attention every time. This means often, we tend to give priorities to things that we don’t have affection for. Consequently, the zeal, enthusiasm and passion which we have those things start to decline as the days go by. If people who make it a point to participate and make resolutions in their various churches set priorities that they are passionate about, they would be able to achieve most of their aims if not all by the end of the year.

Moreover, most people fail to take personal responsibility of their resolutions. Individual responsibility is the idea that human beings are self-responsible for their actions. It comprises acknowledging that one is solely responsible for his or her choices in life; accepting that one is responsible for what one feels, thinks, directions for one’s life and cannot blame others for the choices one makes and taking inventory of one’s strengths, abilities, talents, virtues, and positive actions. Most people who are not able to live by their December, 31st resolutions, blame either individuals or the devil for their failure to accomplish their aim. Mostly, people blame circumstances or individuals for their failures in their quest to accomplish their aims the subsequent year after December, 31st watch-night. Individuals, after December, 31st resolutions, must execute their resolutions on daily basis.

More importantly, to make your resolutions a memorable one in the year 2017, the kind of company and relationships you’ll keep in the year is very key determinant of your failure or success. In the name of boy-friend and girl-friend relationships, more visions have been thwarted and died abruptly. Why waste your resources on a partner who can’t advice you on your financial management? Mind you, no human being is all knowing, therefore, the company you keep must also serve as a guidance tool to achieve more glories in the year 2017 and beyond. Simply, be very critical about the relationship you keep in this year of change.

Sadly, after “crossing over”, those people who thronged to various churches to make resolutions for the incoming year do not have a change of attitude, character and behaviour. It is said that it’s only a fool who does the same thing and expect different results. Thus, people should have a change of attitude and behaviour when they make resolutions for the subsequent year. They should make a conscious effort not to repeat those things that distracted them in the previous years. Again, they should not limit resolutions to only December, 31st but they should make daily resolutions as the days go by.