Having established itself as one of the most important events in the business calendar between the Arab world and Germany, the forum (13 – 14 June, 2013) offers an ideal platform for Arab business leaders to get to know the German market well.

The forum also offers industrialists from Germany the opportunity to engage with strategic partners in the Arab world, which is currently undergoing a dramatic fundamental change both economically and politically.

“The region is on an extraordinary journey, not only for change but also for a better future, with countries in the region following huge economic movements,” observes Mrs Anne Ruth Herkes, Secretary of State at the German Foreign Ministry, who delivered the keynote address.

She told the assembled guests that Germany was willing to partner with the Arab world to train their young people to make them fit for the labour market.

Mrs Herkes stressed: “we will seek to identify projects of mutual benefit for all”, adding “we want to forge long-lasting partnership focusing on the education of young people.”

She commended the “far-reaching economic reforms initiated by the Kingdom of Bahrain in the last 10 years, among them market oriented reforms.”

Bahrain was the partner country at this year’s forum.

Dr Esam Abdulla Yousif Fahkro, President of the Bahrain Chamber of Commerce and Industry described Germany as “one of the most important economic partners” for his country, stressing that the GCC (Gulf Co-operation Council) was working to diversify the economies of its member countries from oil.

To underscore the importance of Bahrain as an important economic partner, a number of German companies have opened offices in the country.

For his part, the Ambassador of the Kingdom of Saudi Arabia in Germany, Prof. Ossama bin Abdul Majed Shobokshi, who is also the Doyen of the Arab Diplomatic Corps, observed that the success of the Forum was shown by its regularity. 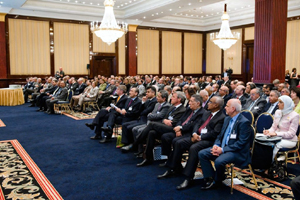 Kamal bin Ahmed, head of the Bahrain Economic Development Board spoke about the economic diversification currently underway in the Gulf region. He announced that in Bahrain alone, the financial services sector contributes 17% of the GDP.

Speaking at the opening press conference earlier, Dr Thomas Back, President of Ghorfa Arab-German Chamber of Commerce and Industry, said that Germany “continues to be a strong partner for the Arab world” with volume of trade hitting 49 billion euros in 2012 and rising. He observed that Arab investment in Germany was also on the increase.

Highlights at this year’s forum were a number of workshops – ten sessions in all – amongst them, the role of women in the Arab eonomy, infrastructure development and opportunities for small and medium-sized enterprises as well as Information Technology.

Federal Foreign Minister Guido Westerwelle welcomed delegates to the forum at a Gala Dinner at the Ritz-Carlton.

On the second and final day at the forum, a Memorandum of Understanding was signed between Dr. Abdulaziz Abdulhamid Al‐Mekhlafi group of companies (AAA group) from Yemen and Mr Abduljaleel Al‐ansari, Al‐Ansari group and associates from Bahrain. 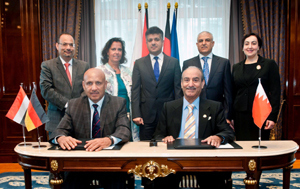 According to the provisions of the memorandum, the AAA group is to partner together with the Al‐Ansari Group and associates to build production plants for concrete mixers. The plants would be expanded later for the production of steel products in Bahrain. The Partnership will create up to 100 new jobs and would work closely with leading German suppliers such as Bosch and thus benefit from German technical expertise.

The Signing ceremony was attended by Kamal bin Ahmed, Minister for transport and Acting Head of the Bahrain Economic Development Board (EDB), the German Ambassador to Bahrain, Her Excellency, Sabine Taberna and the Bahraini Ambassador in Germany, His Excellency Ibrahim Mahmoud Ahmed Abdullah.

Kamal bin Ahmed expressed satisfaction at the signing of the agreement which he said was the result of talks initiated during the Arab-German Economic Forum. He hoped the agreement would usher in new economic partnerships, a strong economic growth as well as contribute to the creation of jobs in Bahrain.

The Arab world continues to emerge as an attractive market for German companies with GDP at $2,365 billion according to the economic report of the Arab League.
With a population of 365 million, half of them under 25 years of age, excellent business opportunities exist for German companies to do business in the region.
German exports to the region rose by 17% whilst imports rose significantly by over 22%. Total trade volume between Germany and the Arab world amounts to 49 billion euro in 2012.
Ghorfa, the Arab-German Chamber of Commerce and Industry is the body that promotes this positive development year-after-year during the last 16 years of the forum’s existence.

This year’s forum, the 16th in the series was attended by 600 high-ranking experts and decision-makers from business, politics and science.

An overview of the latest projects, trends and developments of the German-Arab economic co-operation were presented at the forum.
MIM & AB