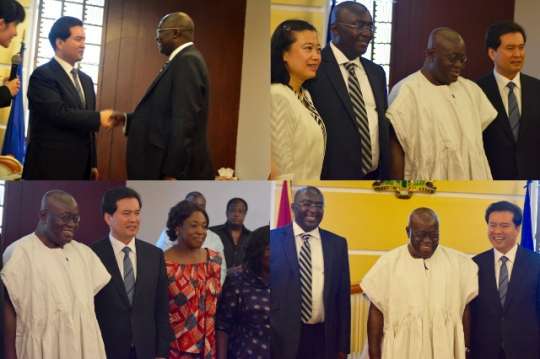 Accra, Jan. 9, GNA – President Nana Addo Dankwa Akufo-Addo on Monday applauded the growing bilateral and economic relations between Ghana and China, expressing optimism that the mutual co-operation between the two countries will flourish during his time, God willing.

“We love very much to continue to building the strong relationship that we have with China in so many different areas, particularly in economic development,” he said when Wang Zhengwei, the Special Envoy of the Chinese Leader, Zi Jinping, called on him at the Flagstaff House on his first day at work.

Mr Zhengwei led a high-powered delegation to attend the investiture of President Akufo-Addo on January 7 at the Black Star Square. Many other regional leaders and heads of government also witnessed the inaugural ceremony where the President and his Vice, Dr Mahamudu Bawumia, were sworn into office by the Chief Justice.

President Akufo-Addo told Mr Zhengwei that the relations between both countries had grown better in the last 10 years, waxing stronger during President John Kufuor’s Administration when he was then the Foreign Minister.

He said the expansion of relations between Ghana and China were exemplified by the fact that trade between both countries had assumed great potentials, as China had become effectively the second largest trading partner to Ghana.

He welcomed an assurance made by the Chinese Special Envoy to encourage more Chinese companies to take interest in the economy of Ghana, saying; “we want to do exactly what you are doing in China, develop rapidly our infrastructure, develop rapidly our economy and we are very open to others from outside Ghana to come in and invest in our country and help us develop our economy.”

Mr Wang commended President Akufo-Addo for his “excellent speech” during the inaugural ceremony and said the speech had left a great impression on him.

He said President Akufo-Addo’s inaugural speech had given the international community the assurance that he would serve the people and that the ideas in that message were in alignment with the thinking of Chinese Leader Zi.

Mr Wang lauded the co-operation between the two countries, particularly progress made in aviation and energy, and said China looked forward to more communications and bilateral relations in international and regional issues of common concern, especially those concerning people’s livelihood.

He said the Chinese Government had confidence in the development of Ghana and was willing to encourage more Chinese companies to invest in Ghana in order for both nations to achieve win-win results.

He said just as President Akufo-Addo mentioned in his speech that Ghana’s doors were opened for more business opportunities, China was also willing to work with Ghana to do more in communication and exchanges in various areas.

Mr Wang is a Chinese Politician, Economist, and expert on Islamic Affairs. Of the Hui ethnic heritage, Wang served as the Chairman of the State Ethnic Affairs Commission between 2013 and 2016, and Chairman (Governor) of the Ningxia Hui Autonomous Region between 2007 and 2013.

He is currently a Vice-Chairman of the Chinese People’s Political Consultative Conference.

China is Ghana’s fifth largest export destination with investment of over six billion dollars as at 2016.

Ghana’s exports to China are dominated by traditional or primary exports, such as unprocessed cocoa, raw metals, wood products, and petroleum oils, which account for 96 per cent of exports to the Asian nation.