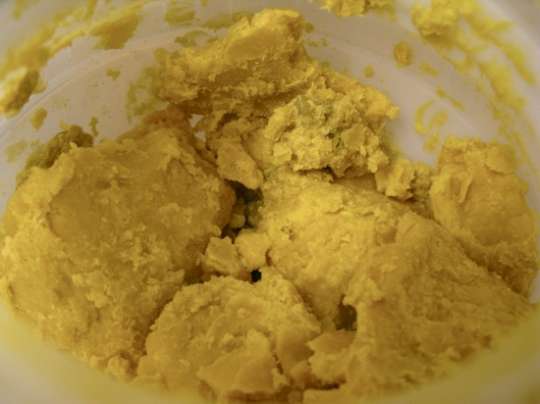 Accra, Dec. 27, GNA – Dealers in shea butter sales say they smell a boom in business next month as the harmattan has started.

They said, the rise in patronage of shea butter popular known as „nkuto“ occured during every harmattan season, which made it logical to make the prediction.

This was revealed by a survey conducted by the Ghana News Agency on Tuesday.

The survey, which sought to determine the connection between harmattan and the patronage of creams also revealed that, shea butter sold more than any other cream during the dry season.

Susana Akua Atta, who sells shea butter at Mallam market in Accra explained that, the cream was more capable of fighting dry skin as compared to its competitors.

She also said, shea butter had some ingredients, which made it effective for fighting some health problems.

Ms Yaa Aboagyewaa Mensah who owns a cosmetic shop at Dansoman, a suburb of Accra, said the cream moisturised the skin and made it look bright.

“We use nkuto for babies, which makes them look beautiful,“ she said.

Mr Appiah Kubi, who deals in the wholesale of the nkuto at Lapaz told the GNA that, the cream was the only solution to fighting the harmattan.

Mr Appiah explained that, the cream was strong enough to stand dry air.

“The cream will make you look fresh all time. It makes your skin soft and relaxed,“ he said.

Adelaide Akosua Korantemaa, a beautician and skin therapist at Madina said shea butter was better than all other creams as she explained that it had very significant nutrients capable of militating against skin diseases such as pimples, rashes, boils and wrinkles.

She recommended the cream to everyone saying, “it was best fit for all type skin colours”.

She explained that, unlike some creams which contained some chemicals which could cause skin irritation and bleaching, nkuto had natural composition, which made it appropriate for patients.

Shea butter is slightly yellowish or ivory-coloured natural fat extracted from fruit of the shea tree by crushing and boiling, widely used in cosmetics as a moisturiser and an emollient, as cooking oil in West Africa, and sometimes used in the chocolate industry as a substitute for cocoa butter.