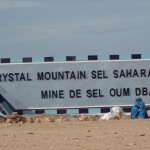 A Norwegian state owned engineering company earlier this year chose to reject a deal for salt from Moroccan-occupied Western Sahara because they found that it would be in violation of their human rights standards.

After having consulted both the Norwegian authorities and the Norwegian Support Committee for Western Sahara, engineering company Mesta chose not to conclude a deal with the American salt producer Crystal Mountain.

Human rights over trade
“Based on the information we were given we chose not to pursue the deal with Crystal Mountain, because of the violations of human rights in the territory”, Director of Procurement at Mesta Paul Robert Rotevatn told Africa Contact, who has tracked and publicised the trade between a Danish company and Crystal Mountain for two years.

A letter to the editor of local newspaper Avisa Nordland earlier in December had implied that Mesta dealt with the Moroccan occupiers in Western Sahara. But Mesta has never purchased salt from Western Sahara, and will not be doing so in the future, says Paul Robert Rotevatn. “Our priority is to have serious suppliers that base their work on ethics and human rights”.

90.000 kilometres of road connects Norway’s towns and cities, most of which needs salting during the winter period, and Norway therefore imports millions of Euros worth of road salt every year (over 20 million Euros from Tunisia alone). The abandoned deal between Crystal Mountain and Mesta was therefore potentially worth millions.

Another Scandinavian company, Danish salt importer Dansk Vejsalt, has chosen a wholly different approach to Mesta in continuing to import salt from Crystal Mountain in Western Sahara, despite having been informed by Africa Contact on several occasions that they are violating international law by doing so, and against the admittedly less than persistent recommendations of the Danish government.

And although four Danish municipalities choose not to buy salt from Western Sahara through Dansk Vejsalt, due to pressure from Africa Contact, several others continue to do so in violation of international law and the recommendations of the United Nations.

According to international law, selling of goods from non-self-governing territories such as Africa’s last colony, Western Sahara, has to be approved by and benefit the indigenous population.

But Western Sahara’s indigenous population, the saharawis, and their UN-recognised representative, the Polisario Front, have never accepted, agreed to or benefitted from Moroccan trading with their natural resources, however.

On the contrary, both Polisario and scores of Saharawi citizens in the occupied territories of Western Sahara have protested vigorously and continuously against what they refer to as the plundering of their resources.