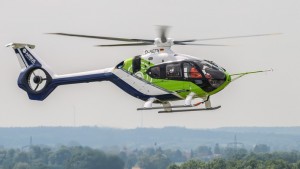 The ILA Berlin Air Show is one of Europe’s most important trade fairs for the entire helicopter industry, which from 1 to 4 June 2016 will be exhibiting its latest products and forward-looking technology at Berlin ExpoCenter Airport.

The focus of the helicopter displays will be on civilian and border duties, i.e. offshore operations, commuter flights, air rescue, aerial work, border patrol and police operations, as well as the key military areas of transport and combat search and rescue (CSAR). For trade visitors the place to head is the new HeliLounge, centrally located among the helicopter displays in Hall 3. Over the four days of the ILA, under the heading of ’Meet the Experts’, for anyone interested in helicopters lectures will be held from 11 a.m. to 5 p.m. A special highlight will be an event under the heading of ’New types of eco-efficient technology in helicopter construction and flight operations’, featuring leading speakers and taking place on 3 June at the ILA Conference Centre in Hall 1. Helicopter manufacturers will be exhibiting the entire range of their products and services on the outdoor Static Display area.

Dr. Wolfgang Schoder, CEO of Airbus Helicopters, Germany, and member of the presidium of BDLI: “This year’s ILA is a major event for the helicopter industry. A visit to the fair is a must for everyone involved in helicopter design, construction and operations as well as new technologies. There will be impressive displays of innovative products on the ground and in the air, including the Bluecopter, which represents a new technology platform. The conference on 3 June will be devoted to new types of eco-efficient technology in helicopter construction and flight operations and areas of civilian and military use. For the first time, lectures and discussions will address the latest helicopter-related topics at the HeliLounge, which will provide an outstanding platform for dialogue and information.”

Ultra-modern helicopter technology on the ground and in the air

Leading helicopter manufacturers exhibiting at ILA 2016 will include Airbus Helicopters, Bell Helicopter Textron Inc., The Boeing Company and Sikorsky Aircraft Corporation. One of the technology highlights at the ILA will be the presentation of the Bluecopter by Airbus Helicopters. With its combination of innovative, eco-efficient technology and a new helicopter design, the Bluecopter paves the way for a lower-noise and more fuel-efficient helicopter generation of the future.

Another fascinating exhibit will be a modified version of the Airbus BO 105 Helicopter, which at ILA 2016 is among the exhibits of the research fleet of the German Aerospace Center (DLR). It also acts as a testbed for investigating flight characteristics, low-noise landings, thermal imaging, pilot assistance systems and flying with outboard loads.

The Bundeswehr will be represented with its range of helicopters at the ILA. The newest one is the H145M which was commissioned in late 2015. This is a lightweight, multi-purpose helicopter whose duties include transporting special units and in the future will be used to provide armed support, aerial reconnaissance and evacuate wounded personnel. The CH-53 transport helicopter, one of the largest in existence, features a high load capacity, can transport loads at high speeds and is extremely reliable. The NH90 multi-purpose helicopter, whose development was commissioned by France, Italy, the Netherlands and Germany, is capable of transporting heavy loads, technical equipment or 20 soldiers. The powerful, twin-engined multi-role Tiger is a modern, two-seater attack helicopter, which features a robust and lightweight fuselage, 80 per cent of which is made of composite materials.

The Bell UH-1D, a lightweight multi-role helicopter, is used for transporting personnel and medical evacuation missions. The twin-engined EC135 training helicopter features a digital cockpit, autopilot and a modern flight management system. Over the course of twelve months trainee pilots learn to fly by visual flight rules and obtain certification for instrument flight and flight by sensors as part of low-flying night-time operations. The Mk 88 A Sea Lynx is a naval helicopter and a key weapon in anti-submarine warfare conducted by frigates. In addition to transporting personnel it performs search and rescue missions (SAR) as part of its naval fleet duties. The MK 41 Sea King operates mainly in the skies above Schleswig-Holstein, the North Sea and the Baltic in order to search for crashed planes and rescue crews and passengers. It is also used to search for ships in distress, evacuate personnel as part of air-land-sea operations and to transport Bundeswehr special units in conflict regions.

The US Air Force and Royal Air Force will be exhibiting a CH-47 Chinook and AH-64 Apache respectively in Berlin. The Boeing CH-47 Chinook is a tandem-rotor, heavy-lift helicopter. It is used mainly as a troop, vehicle, armament and equipment carrier. The AH-64 Apache is a twin-engined attack helicopter, designed by Hughes Aircraft (USA) and currently manufactured by Boeing. In Hall 2 on Stand 232 Bell Helicopter Textron Inc. (USA) will be exhibiting a mock-up of its latest single-engined Bell 505 JRX (Jet Ranger X).

The Black Cats, the Royal Navy’s helicopter display team established in 2001, will provide a further flying show highlight with two Sea Lynxes. In addition, the Wildcat, a military version of the Westland WG13, will feature on the Static Display area. The Mi 35 Hind, an export version of the heavy-duty attack helicopter made by Mil in Russia, will be exhibited by the Czech Republic.

Helicopter conferences look towards the future

Whether for transporting personnel, VIPs and loads, offshore and rescue missions, or for police, army, navy and air force duties, the helicopter market is about to witness a wide range of new models. At ILA 2016 procurement decision-makers from the private and public sector and the military will be able to meet exhibitors representing design, manufacturing, operations, repair and maintenance, training, mission adaptation and the financing of helicopters. On the exhibition grounds they will be able to find numerous suppliers specialising in construction and equipment components and services for the latest ranges of helicopters.