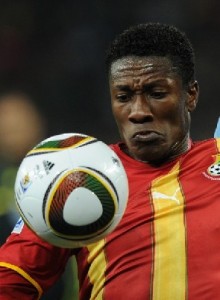 Ghana striker Asamoah Gyan has been named by Fifa for the World Player of the Year award.

The Sunderland striker is among the 23 players nominated by the world governing body for the biggest personal award in world football.

His performances during the 2010 World Cup where he steered the Black Stars to the quarter finals is one reason why he was named.

Gyan’s leading role in the Black Stars final appearance in January’s Africa Cup of Nations in Angola convinced Fifa to name him.

The fact that Gyan is among the three Africans named in the award will certainly boost his chances of winning the Africa Player of the Year award.

But the Sunderland player will face a tough opposition for the Fifa award as some of the best of the best in world football were named in the shortlist.

Last year’s winner Lionel Messi of Barcelona and Argentina as well as Real Madrid’s Portuguese playmaker Cristiano Ronaldo were named for the award.

Seven members of Spain’s World Cup-winning squad made it onto the shortlist for the first ever FIFA Ballon d’Or award.

Xavi, David Villa, Xabi Alonso, Iker Casillas, Carles Puyol, Andres Iniesta and Cesc Fabregas were the Spaniards who made the list, but there was no place for an Englishman, Frenchman or Italian after their poor performances in South Africa.

The winner will be revealed at a ceremony in Zurich on January 10, 2011, with the players chosen by football experts from the FIFA’s Football Committee, the Technical and Development Committee and the Committee for Women’s Football and the FIFA Women’s World Cup, as well as by a group of experts from France Footballmagazine.

The new award is a combination of the FIFA World Player of the Year award and the France Football Ballon d’Or and on December 6, 2010, FIFA and France Football will announce the names of the three men who have received the most votes.

Shortlist for the FIFA Ballon d’Or 2010: