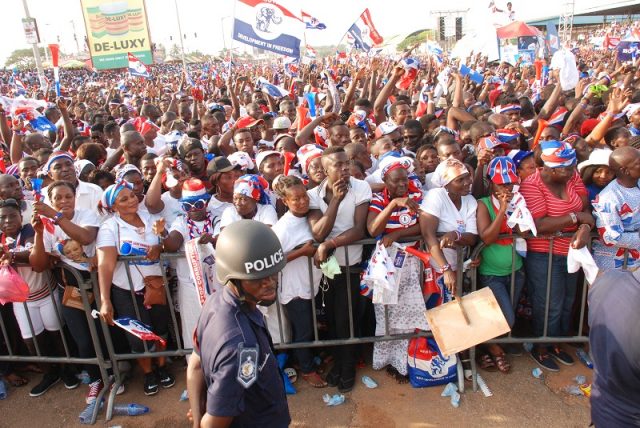 Nana Addo Dankwa   Akufo-Addo, the flag bearer of the Party, sporting a long-sleeved white shirt with black trousers told the milling crowd of members, supporters, fans and sympathisers that “God will grant the NPP victory”.

The victory, he said, would usher in the party into government, to walk gorgeously into the Flagstaff House, the seat of government, come Thursday, December 8, 2016 when the electoral results would be declared by the Electoral Commissioner.

At this statement, the ecstatic crowds that stretched from the La T-Junction through Fair Gardens, Palmwine Junction up to the Labadi Villas near Burma Camp, reverberated into thunderous shouts of “Change is coming, Change is Coming”, as they rolled their index fingers to signify the expected change of government, which the flag bearer announced to emancipate Ghanaians from economic and social hardship under the current government.

Nana Akufo-Addo told the crowd that he was overwhelmed by the sheer numbers who had come out to support the party, which signified that Ghanaians were yearning and ready for a deserved change.

He said though Ghana was endowed with numerous resources, the current government had mismanaged the economy to the detriment of the ordinary Ghanaian and further weakened and collapsed social intervention and protection programmes such as the National Health insurance Scheme, Capitation Grant, School Feeding Programme, and Free Maternal Health care.

He renewed his commitment to bring free Senior High School education, as he explained that education and human resource development was the bedrock of development and social progress.

Nana Akufo-Addo accused the government of the National Democratic Congress (NDC) for ceasing the payment of allowances to teacher and nurse trainees, and said when given the nod, such allowances would be restored.

“When voted into power, we will be careful to use our God-given ideas to bring jobs and create wellbeing for the people of Ghana.

“I will not come to steal from you and to loot the state coffers; we are coming to work hard to push this country forward”, Nana Akufo-Addo assured.