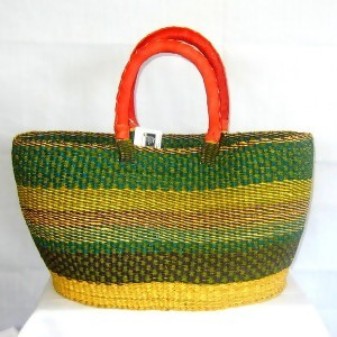 The art of weaving has been a well-kept craft in Africa for generations. Every braider can develop creatively: Bright colours and elaborate patterns give each basket an individual character.

The Bolga baskets come from Bolgatanga. Bolgantanga is the capital of one of Ghana’s poorest regions, the Upper East Region, and is located in the northern most part of the country.

TradeAID enables them to make a living through basket weaving and to give their families a better life. „I didn’t go to school because my parents couldn’t support me,“ says basket weaver Adonpoka Ayingura. „My four children should have it better: Thanks to the support of TradeAID and by selling my baskets I can pay the school fees for them“.

At this year’s International Market place trade exposition, known as Bazaar Berlin, the Bonga baskets would play a prominent role attracting hordes of visitors to pavilions showcasing the baskets.

TradeAID supports the basket makers in many ways. The straw they need for weaving is offered to the communities for a reasonable price. The organisation also pays the weavers in advance as soon as an order is received. Since the middlemen are no longer involved in a sale, the women earn more from their finished baskets.

At Bazaar Berlin, TradeAid offers not only Bolga baskets but also shea butter and the colourful textiles typical for Africa.

Historically Bolgatanga was situated at the southern terminus of the ancient Trans-Saharan trade route. The eastern route converged with the Sahelian route, near Bolgatanga. Along the route, handicrafts—especially straw baskets, hats and fans, as well as leather goods, metal jewellery, and indigenous attires — were exchanged for kola nuts and salt. The Upper East Region, where Bolgatanga lies, is part of what used to be known as the Upper Region. Between 1902 and 1960 the Northern Territory was a British protectorate; it was separated into the Northern and Upper Region on July 1, 1960. The Upper Region was apportioned into Upper East and Upper West Region in 1983*.

The international sales exhibition for handicrafts, jewellery, textiles and home accessories has been held under the name „Bazaar Berlin“ since 2013 and started as a „Partner of Progress“ in 1962. Every year in November, around 40,000 visitors come to the exhibition halls under the Berlin Radio Tower to acquire extraordinary, sustainable and beautiful items from all over the world. The organizer of the Bazaar Berlin is Messe Berlin GmbH.